Ravne na Koroškem is a city that is squeezed into a wide basin in the lower Mežica valley. It is surrounded by rich forests, while in the background from the south side stands the mighty Uršlja gora. The decorated architectural image of the town of Ravne na Koroškem enriches the steel sculptures of Forma Viva, a unique artwork by over thirty artists from fifteen countries, and the city is also characterized by its rich sports infrastructure.

The route along Tolsti vrh starts at the agricultural cooperative in Ravne na Koroškem. At first, it leads along the asphalt road under the railway bridge, past the houses there. After a slight rise, it turns left at the crossroad […] 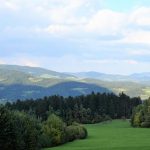 The route to Naravske ledine begins in the settlement Šance. At first, he goes through the forest, then it opens up and passes past the large meadow, which extends to the right, and the farm there. The route leads along […] 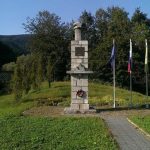 The Malgaj’s route starts at the agricultural cooperative in Ravne na Koroškem. After the railway bridge, we climb the stairs and then along the meadow we reach the farm there. The path leads us along a macadam road past the […]

The route begins at the statue of Prežihov Voranc in the center of the Kotelje overlooking the Uršlja gora. On the main road, we first go to Rimski vrelec. The once-famous Carinthian resort hides the spring of the “hotuljska” mineral […]